One of the things I like about Sicily are these little 3-wheel trucks that come to town laden with fruit and veggies, park on a square in front of a church or by the local bookstore and sell their produce to passers-by.  I love the spontaneity of it, the handwritten signs and the feeling of abundance created by the colourful crates of fruit.

While we were in Sicily last month, we went for a hike on Mount Etna, accompanied by Pippo, a local guide who’s been exploring Etna for the last 50 years and told us lots of facts and stories about the volcano he’s passionate about. 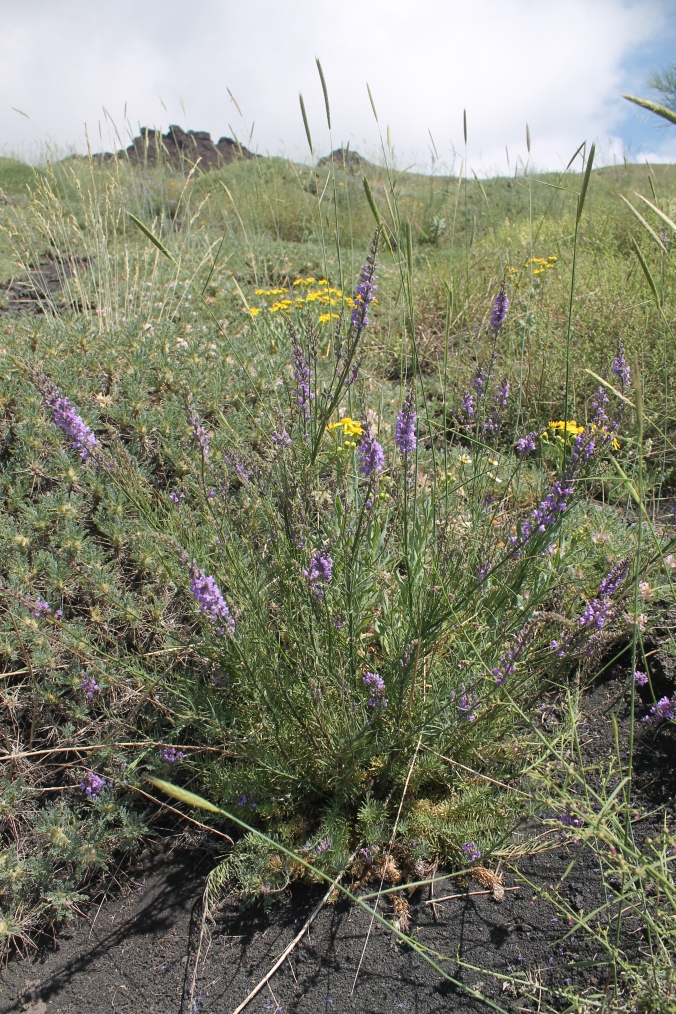 We didn’t go to the main crater, but rather avoided the crowds on a much more quiet route on the South Eastern slope. The views were breathtaking as we hiked along the crest of the Valle del Bove, a huge valley which was filled with lava of the 1991 erruption and is still the recipient for more recent lava trails.  You can see on the picture the darker lava trails from the latest erruption mid-June. 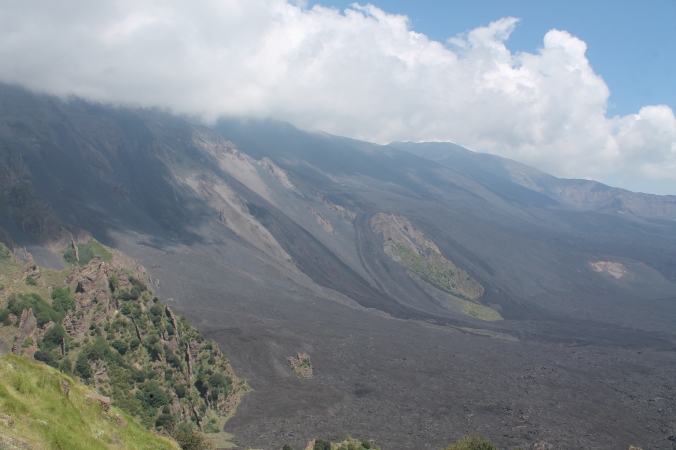 The photos cannot really capture how enormous the valley is, a gigantic bowl catching the lava and protecting the villages and towns further down. The lava field is entirely barren with no plants growing on it, a huge dark moon-like surface, but on our path, above the valley there was plenty of life.

It was a beautiful walk, with changing landscapes, incredible rock formations, and lots of plants that somehow manage to take root in the volcanic soil and survive under the blazing sun.  As we walked we were surrounded by butterflies and thousands of bees, buzzing frenetically around the flowers. 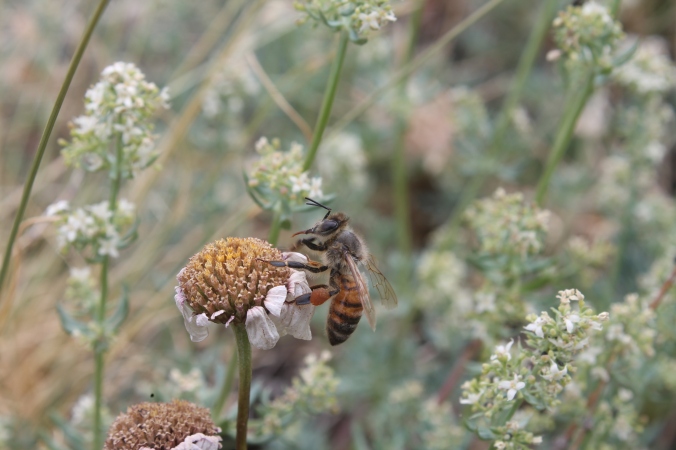 As we made our way along the path that was sometimes marked just with a piece of red ribbon, the views on both sides of the crest evolved, always wild and spectacular… It left me wanting to return and explore more.

Just a few words today, as I ease back into work and the day to day rhythm. We had a great trip in the lovely town of Acireale, where Paolo’s family have an appartment. Returning to a place one has visited several times, is a very particular feeling, like peeling away different layers and going deeper.  Next to our usual favorite spots, some new discoveries for me were the tiny bakery that makes that one type of delicious sesame biscuit and the inconspicuous lupini bean factory at the end of an alley, where the legumes soak for ten days in a big pool of running water before you can enjoy them with lemon juice… I have plenty more to mention, but for now I want to savour mentally processing these latest adventures:) 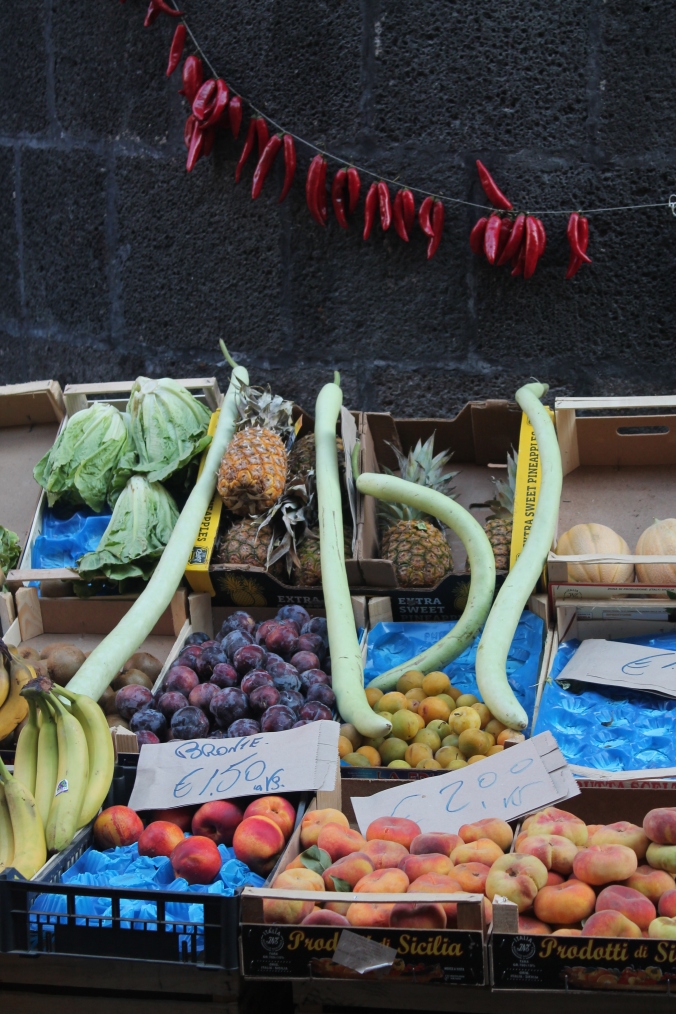 When this is posted, I will be in Sicily for holidays:) If it is anything like our last trips there, a lot of time will be spent exploring, chilling and eating delicious food:)  I’m looking forward to proper sunshine and summer weather, jumping off the volcanic rocks into the transparent sea, going to the market to buy kilos of juicy plums and peaches that remind me of what fruit should actually taste like, and walking through the small streets soaking up the atmosphere…

During that time I look forward to being very little connected to internet and very much connected to the beauty of the island, Paolo and his family, and everything I will get to discover. I’ll return after a little break from posting. 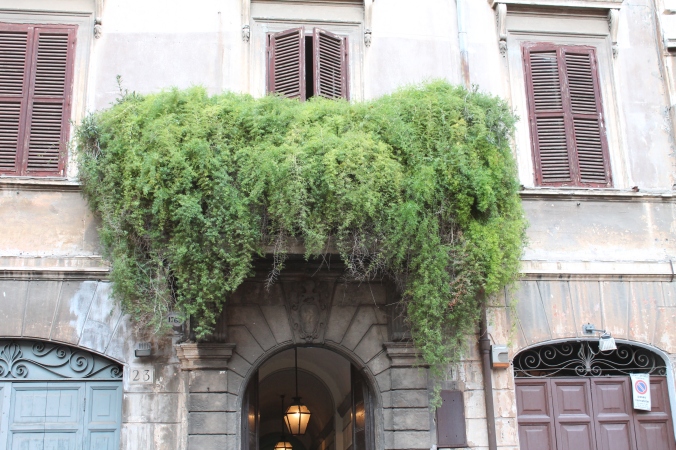 To see the other posts of this series, click here 🙂 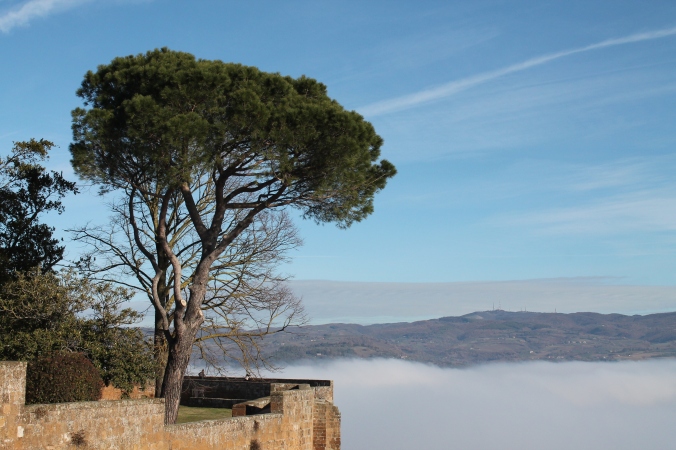 In the first days of the new year, I was visiting my boyfriend’s family in Rome and we decided to look for an excursion a little further afield that was easily accessible by public transport.  We chose Orvieto, a fortified town on the top of a massive rock. 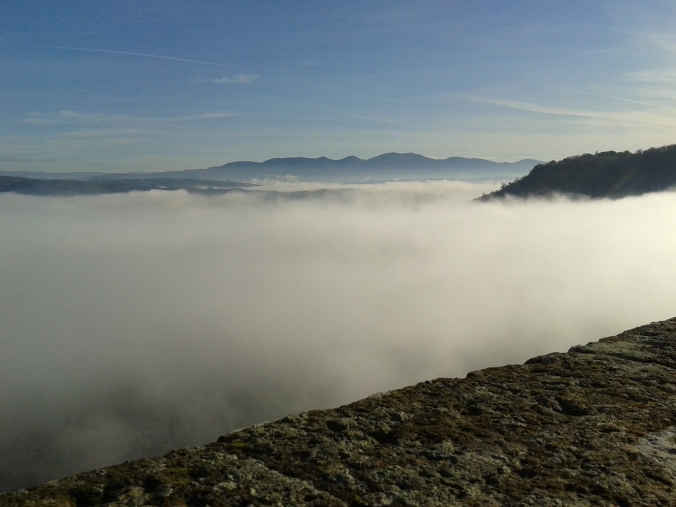 Stepping off the train it was grey and misty, but as we rode up the hill in the cable car we pierced the clouds and at the top, from the walls of the fortress, we found ourselves overlooking the most beautiful sea of clouds over the valley.

There is an amazing cathedral with incredible patterns and dizzy-making columns on the facade.  Once inside, we pretended to be part of an organised group and tagged along to listen to the explanations of their very knowledgeable guide who was pointing out the stories and details of the frescoes that made them come alive. Some of the paintings seem like they came straight out of a science-fiction scene including lasers and 3D effects.

Orvieto is a small town and I was glad to be visiting it off-season (despite the biting cold) as I can imagine it can get swamped with hordes of tourists in the summer.  I particularly enjoyed exploring the winding streets a little outside the touristy center, looking at the details of the old stone houses overlooking the valley and imagining what must have been like to live there in the past.

How to get there by public transport: take the train from Rome to Orvieto station (approx. 1 hour), then simply cross the street where you can buy a ticket to get on the cable car that will take you right up the hill (it leaves every 10 minutes).

Today in Amsterdam, the weather is a drab grey with a bitter wind that turns cycling into a real battle if you are unfortunate enough to need to pedal against it. So I’ve decided to reminisce about that day during our stay in Rome when decided to get out of the city and go on a day-trip to Subiaco to climb the Monte Autore.

It was a beautiful sunny day as we drove up the mountain, thoughwe weren’t at all prepared for snow as we’d only come with regular hiking shoes! Luckily many people had preceded us on the path and the snow was compact enough to walk on most of the way, if we just followed in people’s footsteps. 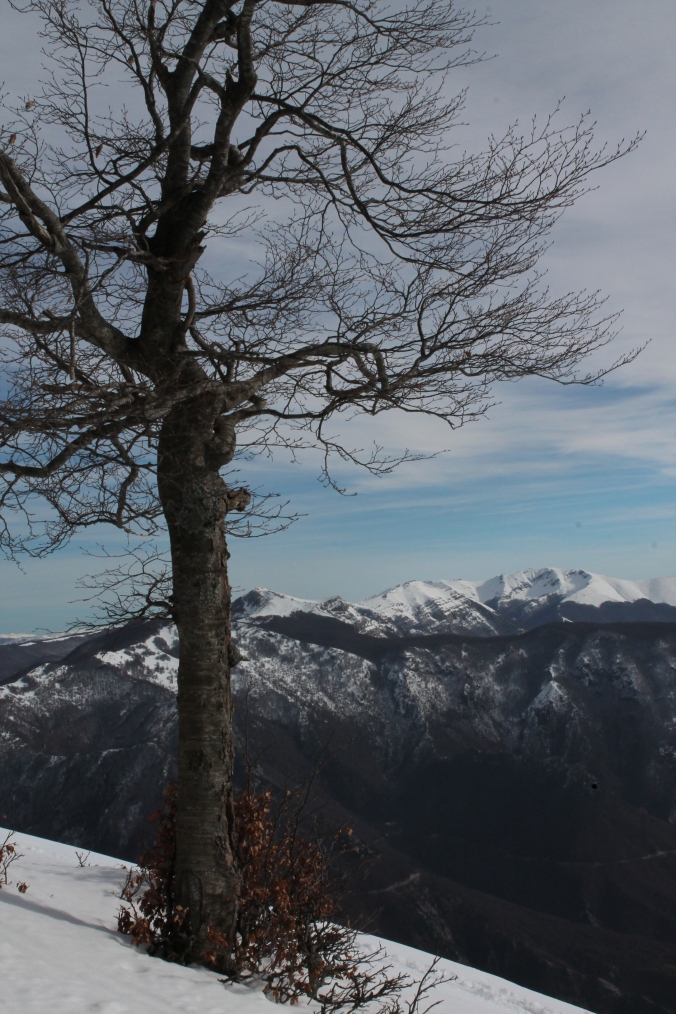 Most of the way the path isn’t steep and we could just saunter along. As we got higher the views over the surrounding mountains became increasingly breathtaking. From the top, at 1854m, the landscape was amazing, with the clouds, mountains, trees and snow interweaving as far as the eye could see.

On the way down, I suddenly found myself entirely alone as the others were further ahead. I took a short break, knee-deep in snow, surrounded by utter silence, just to soak up the utter joy of the moment.  I etched this moment into my mind, with all its sensations, to tap into when I need a boost (on a grey Sunday afternoon for instance). Then I proceeded to stumble/run giddily down the snow-covered slope to catch up with the others. 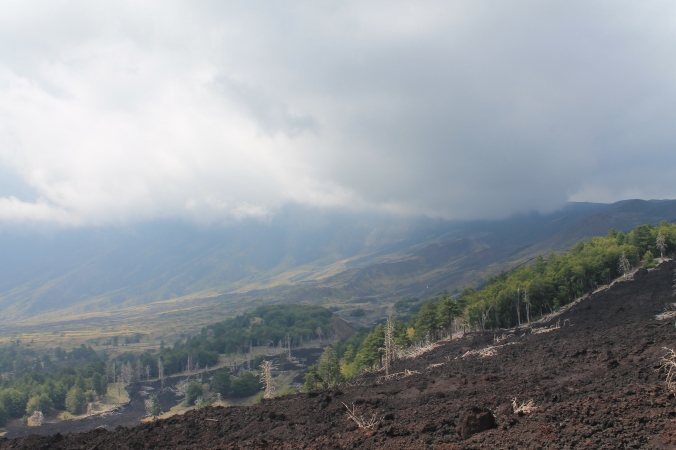 I’m very happy that Paolo is back from his month away in Italy!  For a while he didn’t have a return ticket and I wasn’t sure he’d even come back;)  Though I must say I wouldn’t have blamed him for staying, considering how warm and sunny the weather was over there! It’s a pleasure to catch up with each other whilst eating amazing Italian delicacies and to hear all about his time soaking up the culture in Rome and Sicily with friends and family.

In particular, Paolo’s latest stories about hiking on Mount Etna with his dad, have me aching to pull on my hiking boots and go straight there to feel those sensations again! This is a picture from our trip in August 2013.  It’s so impressive to see where the lava rolled down the side of the hill, destroying everything in its path and leaving only a few tree-skeletons standing.  Up high on the mountain the air felt surprisingly crisp and cool, and I loved the unique crunch of dried lava beneath my feet, as we walked through the majestic and desolate landscape… I have the feeling we will go there again soon:)

Whilst wandering the streets of Rome and other cities in Italy, I love to look at the details of the shopfronts which look so different to the ones in Amsterdam. Some of them have clearly remained unchanged for decades, with their amazing old-school fonts, diluted colours and paint slowly chipping off.

To me it actually gives these shops a certain charm and I wonder whether inside they are still working according to the more humane rhythm of those long-gone eras… Here are a few of my favorites from my last trip.

Here are a few more memories of our lovely time in Capraia… The ‘mulatiera’, a beautiful rock path that the mules use to follow to carry goods up and over the hills to remote parts of the island.

The splendid colours of the vegetation, lush and green in some parts and a drier orangy-red in other spots. 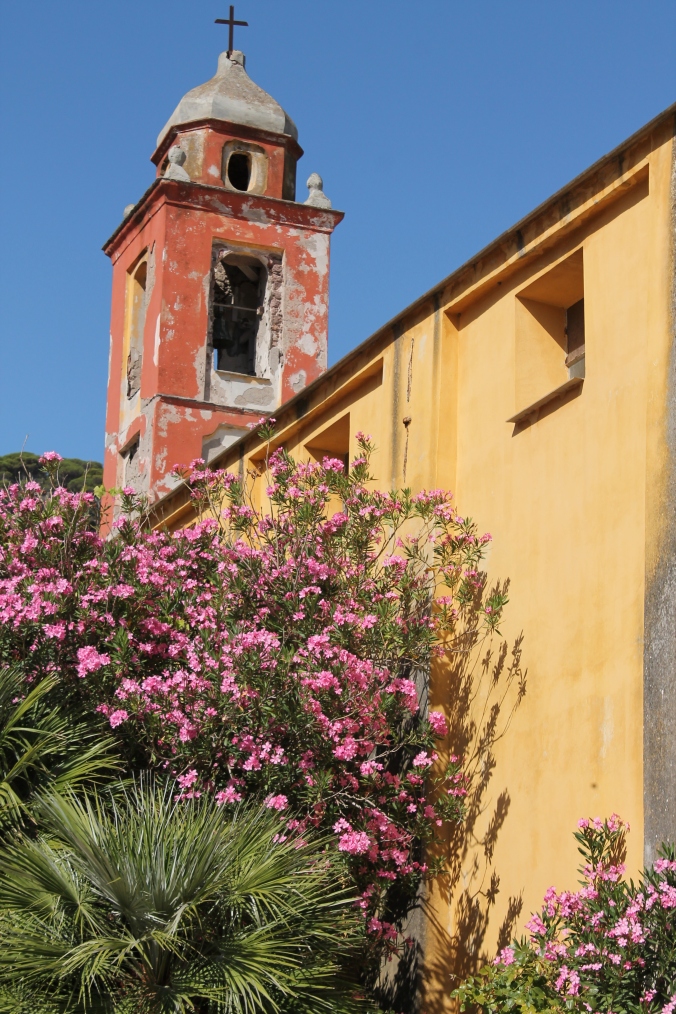 Spending time looking through my holiday pictures takes me back to those moments and I’m reminded of the sun shining on my skin, and the tug of leg muscles slightly tired from hiking uphill, and the joy of spending all day outdoors… Can’t wait for the next holiday!